Thanks for your Support Hobart

We would like to thank all of our valued ANMF members and their family, friends and colleagues, who exercised their right to ‘have a say’ and joined the Retain. Recruit. Recognise march and rally from the Royal Hobart Hospital to Parliament House on Thursday 7 December.

The weather was warm but that didn’t stop you from sending a strong message to the Tasmanian Government that the future of nursing in Tasmania is in their hands. To those that stayed behind to maintain safe patient care: we are deeply grateful.

It was very nice to have members of the general public applaud the marchers. Your work is widely appreciated.

We would like to send a big thank you to anyone who:

The ANMF, Organisers, and Representatives are fighting for the Tasmanian Government to offer a competitive salary. We understand fair pay is essential if Tasmania is to retain, recruit and recognise the future of the Tasmanian Public Sector nursing and midwifery work force.

Remember - the future is run by those that turn up and your contribution is essential. You are the union.

To learn more about what action is being held in your area, what you can do to lend a hand in the campaign, or simply pledge your support by signing the petition, visit ea.anmftas.org.au 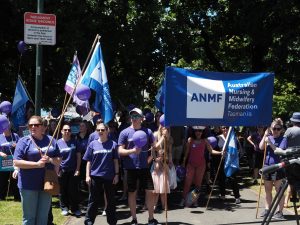 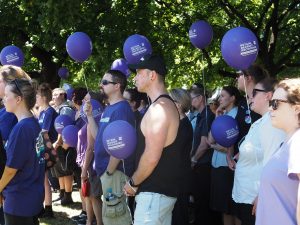 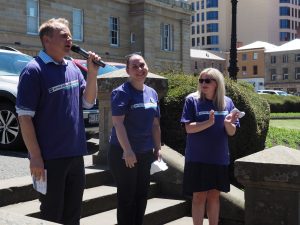